I would be surprised if there was any competitive athlete, of any age, who was not worrying in January that their fitness had taken a hit and it would be hard to get back to a normal season of racing.  I hope to show in this D3 Athlete Case Study that for one athlete this was not as bad as it might have been when Determination was part of the plan.  But first let me digress off-topic a bit.

Throughout human history there have been challenges that exceed the one we have been in for the past 18 months and are, I think, on the road to resolving.  The flu of 1918 killed a far higher percentage of the population and going further back to things like the Black Plague worse still.  That’s not to minimize the Covid Pandemic.  Far too many lost lives and lost loved ones. By comparison, worrying about fitness loss seems to me at times to be rather selfish.  But for those of us bitten by the bug of endurance training, it is part of our life making life fun and fulfilling.  So perhaps it is not selfish if put in the right perspective.

Even without Covid we all face challenges from time to time where our individual personal lives are disrupted, and the training is put on the back burner.  Combining such individual disruptions with Covid just compounds the challenge to the athletes.

Towards the end of last year, most of you were rolling the dice and signing up for races this year.  We did not know what to expect, and things are still a bit uncertain, but we started training as if 2021 would be somewhat close to a normal race season.  Mary Peebles was no different.

Mary’s plan was to race the Des Moines 70.3, June 19, Nationals in August, and IM 70.3 in New Zealand near the end of the year.  Training challenges were, in January, limited to limited swim time in the pools.

Progress was reasonable up into March when a family problem started to interrupt training and in early April training had to stop for almost a week as can be seen in the graph above and below.  The worry was, of course, how much fitness would she lose.  Training time was limited through much of April with most of it indoors, even on nice days, then gradually, she started to build again. While the weekly duration did not and could no, be increased we focused on quality work, some LT and Aerobic Capacity training cycling, and running. 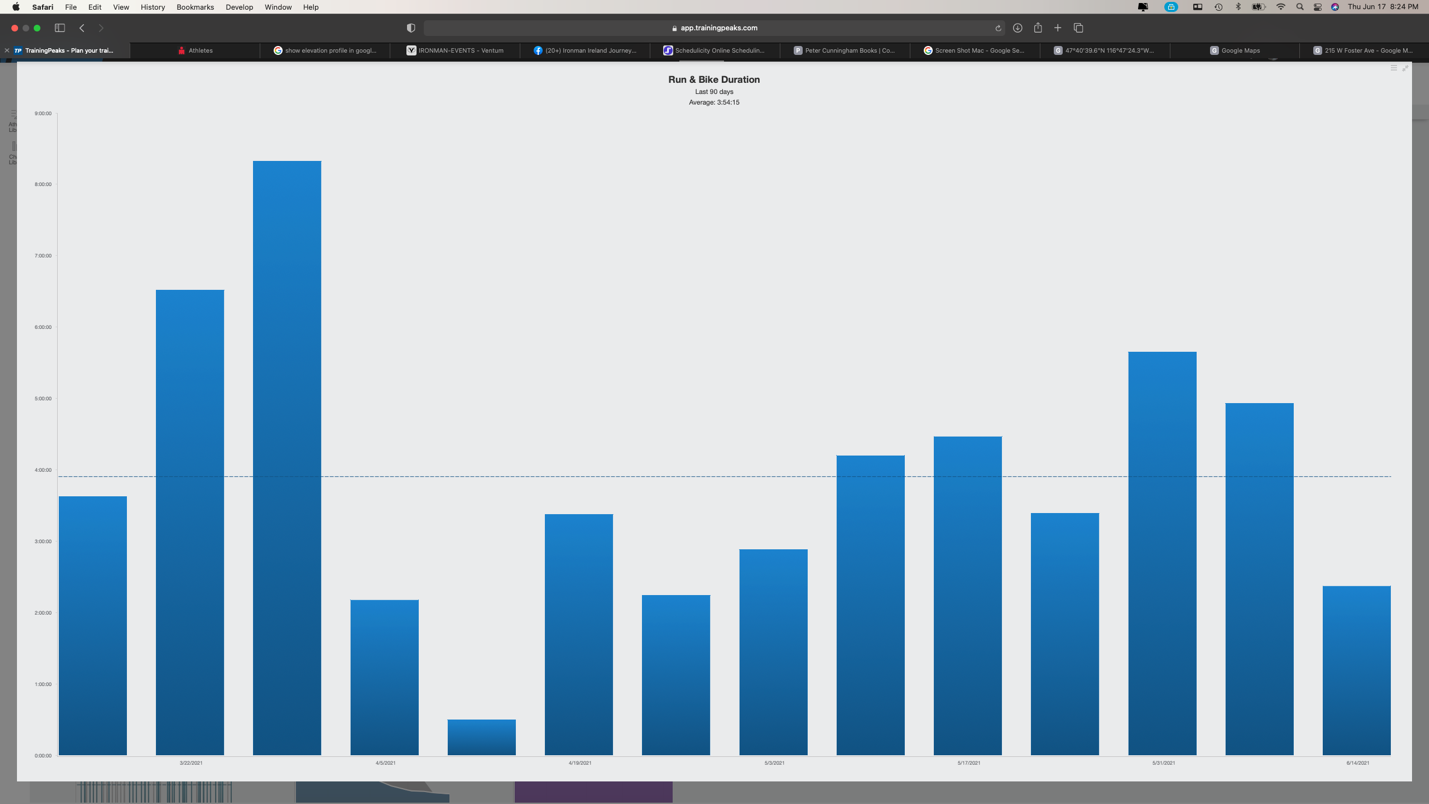 After three weeks back at almost full training, we decided to run some tests to see what had happened to Mary’s FTP, Run Swim Pace at LT.  From some of her workouts, I was reasonably sure she had not lost much fitness if any.  The results of the testing confirmed my hunch and had some icing on the cake.

Here is what I said to Mary in an email summing up the tests.

Mary:  Your running speed is not as bad as you think (she had expressed that thought a few days before we ran the tests).  Your test came up with a 10:55 pace for 5k and that translates to an LT pace of 11:31, about 30 sec faster per mile than I had set for you in March.  In real terms for your training this does not change things much because, for example, you were already running at that pace in some runs recently that called for LT pace and lasting 15 min or more.

Your 20 min average power in the bike test was 112 watts.  I noticed you got slowed up or perhaps stopped at some intersections, so I did a rough calculation of the avg. power was without them, it came to 115w.   That raises your Threshold power to 107 from 100.  That may not seem like much but it’s a 7% gain, a great number considering what you have been going through lately.

The bike power number might even be a bit low based on your aerobic capacity workout yesterday.  There you averaged 107w for 20 min of the intervals with peaks above the new power numbers suggesting that you might be able to hold a bit more power in a test not interrupted by road conditions.

As for the swim test, it looks like the zones I have set for you are what they should be, in other words, swimming shows no improvement but also no fall off.  Again, great considering.

I hope this makes the case that some time off does not necessarily mean a loss in fitness if it is not too long and you can focus on quality workouts.  Mary is not at the same level at this time of year compared to prior years.  Des Moines had to be put off for another race (TBD) but Nationals is still on and there is time to build some more in the next 7 weeks and have a good day in Milwaukee.  We look forward to what’s ahead for Mary.

Coach Simon Butterworth believes that the key ingredients in a good coach/athlete relationship are regular and open communication, mutual respect, and keeping it fun for the athlete and their family. His training programs are developed with those ideas in the forefront.